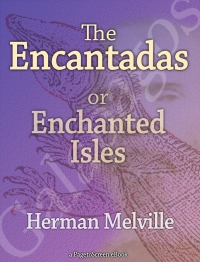 This essay was first published in Putnam's Magazine in 1854. It was collected in The Piazza Tales, Dix & Edwards in 1856.

The Encantadas are actually the Galapagos Islands. There are ten sections that Melville calls 'Sketches'. Some of them refer to individual islands in the group and some sketches cover some general points, such as pirates and castaways.

Each sketch is prefixed with a quotation from Edmund Spenser's Faerie Queene which was published in 1590. 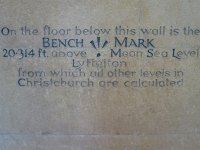 Benchmarks are datum or reference points, from which other things are measured.

We were in Christchurch, New Zealand in January 2010.

I took this photograph of the benchmark on the stonework of Christchurch Cathedral - now sadly  badly damaged by the earthquake in February 2011. Perhaps this stonework is still there. I doubt, though, if this is benchmark is at the same height above sea level. We were deeply saddened by the events in Christchurch (a city that we enjoyed visiting), and our sympathies go to the people who are still suffering.

I post here too, a photograph of a benchmark here in Oxford.